In the Spring of 2008 when I first heard El Rey, a lot of the album was new to me. I’d heard a few tracks live, notably, ‘I Lost the Monkey’ and ‘Soup’ during a small Scopitones forum group visit to Barcelona. During this time I was going through some difficult personal moments and I felt a little disenfranchised from the band that I loved the most. A lot of the tracks were hard for me to connect to. Even now I’m not sure if it was me or the music that didn’t feel right.

Certainly I know people who love El Rey and everything on it. It ranges from spiky pop to layered anthems. And if there’s one song that gets universal praise it’s the penultimate track on the album, ‘Boo Boo’. As I mention below in one of my questions to David Gedge, It has a gorgeous structure with several different sections that flow organically like the emotions that the narrator goes through during the course of the evening meal. There aren’t many lyrics but what’s there cover lots of nuance and hidden angst.

The creation of the song is described below by it’s co-writer Terry de Castro. It might surprise people, who think of The Wedding Present as David +3, how much creative scope his fellow band members have had right since the beginning. Terry has co-written ten songs over the years for both this band and Cinerama. She still occasionally tours as a member of the band and of course has a music career in her own right – check out her solo work here if you are unfamiliar with it. https://scopitones.co.uk/terrydecastro.

I don’t think El Rey will ever become my favourite album but there are songs and moments that hit the special heights that no one else’s music can. The beginning and end of ‘Boo Boo’ are in that category. I love the hope and expectancy that the intro brings. I love the burning urgency and frustrated desire that the epic closing section ramps up into. There is only one released version of this song. I’d like to hear a well-recorded live version, that captures the power that it has at a gig, one day.

‘Boo Boo’ was co-written with Terry de Castro. What was the sequence of events in the creation of this song?

TdC: When we were writing songs for El Rey, our method was a bit different to what it became later on. It’s more organic now, with someone presenting a riff to the whole group and everyone working on it together in the rehearsal room. But our song writing method back then was quite meticulous and painstaking. We [meaning any band member] would come up with a riff, usually on guitar, and then convert it into MIDI [Musical Instrument Digital Interface] using a MIDI-compatible keyboard and then send it off to David. He would work with it and manipulate it, to put together a song, and then we would transfer the piece back into a guitar / bass / drums arrangement. For ‘Boo Boo’, I’d come up with a verse and chorus riff on guitar in Los Angeles and then I sent it to David as an MP3 and in MIDI form. He then brought the semi-arranged piece back to the whole group which, at the time, was Graeme [Ramsay] and Chris [McConville]and me, and we worked on it at a rehearsal room in Scotland. Since Chris was the guitar player then, I had to teach him how to play the actual guitar riff, which was initially a lot faster and much poppier. It sounded okay, but we started to wonder how it would sound slowed down, and it was a lot better, so we made quite a perky little pop song into a slow, epic… masterpiece. Ha, ha! No, seriously, it’s much easier to make a song sound good when you slow it down, for some reason, but this one really did lend itself to a slower and heavier approach. And we just kept heaping sections onto the ending, loving the slow build-up to the final crescendo. It’s great fun to play live for that very reason.

Is there anything you can say about the inspiration behind the lyrics? I love the details in lines like the “waiter’s stacking the chairs”; is this something experienced, observed or just made up?

DLG: As usual, it’s a mixture of all those things. I used the idea of the waiter stacking chairs in the background because I felt that it was quite cinematic.

I’ve never heard ‘Boo Boo’ used as a term of affection but maybe I’m the only one. Do you know anyone who uses this name or is it just your tribute to the old Yogi Bear cartoon?

DLG: I have heard someone using Boo Boo as a term of affection, yes, but the fact that it’s a Hanna Barbera cartoon character – although they spell it Boo-Boo – was always going to appeal to me and my never-ending desire to include those kinds of pop culture references in the songs!

The song structure is very interesting. It clocks in at nearly six and a half minutes, starting with a half-minute, glorious, crashing intro, like the excitement leading up to a date. The sections that follow have very sedate verses and anthemic choruses. At 3:45 we move into a ramping instrumental section that builds and builds and it feels like it will lead to something more but then it ends, almost like the end of a night that one hoped would lead to more and doesn’t. How much do you like song structure to match the emotional feel of a song?

DLG: I don’t consciously try to match the lyric with the arrangement of a song. I write the lyrics towards the very end of the song writing process, anyway, and the structure is usually in place by then. The musical arrangement probably influences the lyric writing in some way but I don’t think I would be able to describe how, because it’s different every time. Anyway, more often than not, I’m more satisfied when a ‘happy’ lyric is teamed with a dark soundtrack, for example. Or vice versa.

What lead to the positioning of this track on El Rey? It has all the hallmarks of a traditional final track but you decided to follow it up with the more atypical ‘Swingers’.

DLG: We have a history of doing that, though, don’t we? Even though we never play encores live, some of the albums have an extra atypical track added on, to follow what would you’d think would be the more obvious LP closer. We have ‘You Can’t Moan, Can You?’ following ‘Anyone Can Make A Mistake’ on George Best, ‘Be Honest’ following ‘Take Me!’ on Bizarro and ‘Hot Pants’ after ‘Catwoman’ on Watusi. I guess you could put it down to non-atypical Wedding Present contrariness!

DLG: Is it that much different?! It’s not meant to be. We usually try to replicate the live version in the studio and listening to the album now that version seems to build nicely. The idea is that the drama heightens throughout the end section as the intensity increases. I think that outro is one of my favourite ever bits of Wedding Present music so I love playing it, even though my part is quite challenging!

Well yes, it’s late; the waiter’s stacking the chairs
But, never the less, just wait; I don’t think he really cares
And if we leave now I’ll be kicking myself all week because we get so few chances to talk just like this
And I would regret just saying: “See you,” because this is something that I really miss
So I aim to detain you for as long as I dare

You just don’t get it at all, do you?
Boo Boo!
The reason I call is that I still love you

Your eyes are glistening as you fill my glass to the brim and, though I despise listening to you talk about him, seeing you being with that man is much better than not seeing you at all
And you can’t leave
Not when we’ve been having such a ball

You just don’t understand, do you?
Boo Boo!
That tonight was all planned because I still love you

You just don’t get it at all, do you?
Boo Boo!
The reason I call is that I still love you 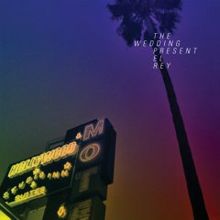 ‘Boo Boo’ wasn’t played live until several months after the release of El Rey. It debuted on 01/09/2008 at the Barfly in Birmingham as the set closer. It stayed throughout the tour that carried on until the end of the year. It continued as a fixture during the next tour in March 2009. it then disappeared from the set for nine years before re-appearing in March 2018 and was played on and off throughout the year with its last time out at the time of writing being 03/10/2018.